A few weeks ago, I had the pleasure of creating this month’s biocreativity blog header image in Dr. Larry Gilbert’s “Fire Ant Lab” at Brackenridge Field Laboratory (or, BFL for short) – an 88-acre field station at the University of Texas at Austin. As you know from my post from last month, I’m really into time-lapse. After the July 2011 biocreativity header image and video using native plants from my backyard, I started brainstorming on what else I could use to create interesting header images and time-lapse videos for the blog. Of course, I wanted to do something with animals – but how would I keep anything still long enough to spell out b-i-o-c-r-e-a-t-i-v-i-t-y, and how could I get enough of any one kind of animal to do it? Then it hit me: FIRE ANTS!  What if you could make fire ants spell out ‘biocreativity’ and then all walk away? So, With the help of Dr. Rob Plowes from the fire ant lab, his excellent team of research assistants, my husband and his tripod and the BFL deep freeze, I set out to create the August 2011 biocreativity header image and time-lapse video using the South American red imported fire ant (Solenopsis invicta). Here it is if you didn’t get to see it earlier.

As a former teaching assistant for a lab course in field ecology methods at BFL, I was familiar with the work of the fire ant lab, so I knew a few “tricks-of-the-trade” when it comes to ants that could make for a really interesting biocreativity project. Two natural history characteristics that make these invaders very good at what they do also worked to my advantage in this project.

First, fire ants make rafts. Literally. They link themselves together to make a raft formed from of their own bodies, which helps them disperse during floods to found new colonies. This phenomenon got quite a bit of media attention last April when researchers Nathan Mlot, Craig Tovey and David Hu published the findings of their research on the water repellency of fire ants and how they cooperate to make rafts in the Proceedings of the National Academy of Sciences.  It was covered by NPR, The Huffington Post and Scientific American among others. Their project is yet another great use of time-lapse that helped to visualize and explain how natural phenomena work, and it helped Mlot and colleagues make some very interesting discoveries about biomimicry which may have technological applications in developing new waterproof materials.

Rafting not only helps the fire ants live to colonize another day, but it’s also used to the advantage of researchers studying fire ant behavior and how to control the spread of this invasive species. In Dr. Gilbert’s lab where I met up with Rob Plowes, he showed me how they use the natural tendency of fire ants to raft as a means of easily separating hundreds of thousands of fire ants from the soil they’re collected from so they can be used to study this invasive species. In short, when they dig up fire ant mounds from the field, they place the dirt mixed with ants in 5-gallon buckets. They then bring them to the lab where they slowly drip water into the buckets overnight. This ‘rising tide’ of water in each bucket prompts the ants to dutifully gather up their brood and make for the surface where they all gather together to form a large raft.

Here is a figure from Nathan Mlot, Craig Tovey and David Hu's paper "Fire ants self-assemble into waterproof rafts to survive floods" in the Proceedings of the National Academy of Sciences. Available from http://bit.ly/qYBnRw

The research in the BFL fire ant lab is focused on developing effective biocontrol agents for S. invicta, and they’re doing it using very species-specific parasitic phorid flies (Pseudacteon sp.) which interrupt foraging and other behaviors which can end up making colonies less successful in the long term. You can take a really cool virtual tour of how they conduct this research here. Thanks to these generous researchers, the problem of where I was going to get enough ants for this project was solved. They simply set aside a single tray of tens of thousands of fire ants when they were done with their research for my project.

Now that I had enough ants, how was I going make them be still long enough to spell out the title? Well, I was introduced to a similar problem when I was the teaching assistant for Dr. Gilbert’s field ecology lab. We taught our students how to conduct ant diversity surveys by baiting for ants, usually by setting out a piece of hot dog, which any picnic-goer knows is irresistible to ants. We quickly captured the ants on the bait with a plastic baggie (reminiscent of the process of picking up after your dog) and brought them back to the lab to identify to species and count. The problem was, how do you count all the individual ants when they won’t be still? The solution lies in the fact that ants are exothermic (or “cold blooded”), meaning they get their body heat from the external environment and are less active at cooler temperatures. So, we simply put the bags of ants in the freezer to immobilize them. Once frozen for 10-30 minutes, students had a limited time window to count the ants until they warmed up enough to start moving again. It’s amazing how long it takes for this to kill the ants – usually well over 12 hours of deep-freezing! For my project, I simply put the tray of ants from the fire ant lab in the freezer while we set up the video equipment. 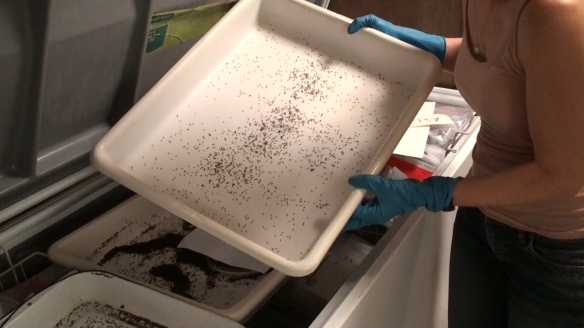 A tray of fire ants is immobilized in the deep freezer.

To create the title image, I made a stencil to spell out ‘biocreativity’ on which I sprinkled the immobilized ants. One thing that made this a little difficult was the same thing that allows the ants to raft – their legs stick together, so instead of little individual ‘sprinkles’ I ended up with more of a flocculated mass of ants that stuck together a little bit, making the letters seem ‘fuzzy’ around the edges. Also, if you ever do a project where you pour ants through a stencil, make sure you pick a font with block letters. The angle on the “t” I used gave us a bit of trouble, but it turned out OK. Some forceps and pin tools helped clean up the edges, and after a few takes, we had a pretty good image and — if I do say so myself — a pretty darn cool time-lapse.

Here’s the making-of video that shows how we did this, along with some outtakes that show some of the difficulties we had getting the ants to go through the stencil just right. Many thanks go to my husband, researchers Dr. Rob Plowes and Dr. Larry Gilbert and the hard-working crew of the Brackenridge Field Laboratory fire ant lab. Enjoy!

And, yes — because I’m sure you’re wondering — I did get stung twice…in the name of biocreativity!