Driving back from a Labor Day visit from Fort Worth to Austin earlier this week I was awestruck by the size of the smoke plumes emanating from the wildfires currently raging in Bastrop County. It’s overwhelming to consider the extreme devastation that my neighbors to the East are experiencing in the wake of these fires. As an ecologist, I’m also thinking about what this will mean for the Lost Pines ecosystem and populations of the endangered Houston Toad that have already been devastated by the current drought and habitat destruction. My thoughts are also on Bastrop State Park that is all but 100 acres burned, and nearby Buescher State Park and Stengl Lost Pines Biological Field Station. All of this got me thinking of ways that the arts and biology have merged over one of nature’s most destructive and renewing forces, and with a little bit of research I’ve found some very interesting examples.

It probably goes without saying that our species would not be where it is today without fire. Some very ancient forms of artistic expression would not have been possible without it. Our ancestors that created paintings located deep within caves would not have been able to access such depths without light from a fire. Pottery, my own preferred medium, requires fire to vitrify the clay into a strong and watertight form. One of the most beautiful examples of earth, fire and biological materials coming together to create art is horse hair raku-style pottery. In this technique, the fired pottery is heated and coarse horse hairs leave behind their carbon markings as it burns off of the pot.

Fire also plays an important role in the mythology of one of my favorite types of creatures: the salamanders. The ecology of woodland salamanders that live underneath logs is responsible for the genesis of this mythology. When people collected logs from the forest and burned them for cooking or warmth, the once-hiding salamanders ran for their lives, emerging from the fire (wouldn’t you?). Our early ancestors found this quite magical, and their stories around the campfire later influenced early texts on alchemy and zoology. Pliny the Elder (23-79 A.D.) was one of the first to describe the association between fire and salamanders in his Historalis Naturae, and several medieval bestiaries also described the salamander as a creature of fire. In his notebooks, Leonardo da Vinci writes about the salamander, “This has no digestive organs, and gets no food but from the fire, in which it constantly renews its scaly skin.” An excerpt and emblem from the Book of Lambspring, a book of “spiritual alchemy” first published in 1599 by Nicholas Baurnaud describes this association a bit more lyrically:

In all fables we are told
That the Salamander is born in the fire;
In the fire it has that food and life
Which Nature herself has assigned to it.
It dwells in a great mountain
Which is encompassed by many flames,
And one of these is ever smaller than another—
Herein the Salamander bathes.

"Figure X. A Salamander Lives in the Fire, Which Imparts To It A Most Glorious Hue" from the 1599 alchemical text the Book of Lambspring

One of the first landscape paintings of the renaissance, Piero di Cosimo’s 1505 painting The Forest Fire, depicts quite a bestiary of real and imagined animals fleeing from a wildfire. This painting is said to have been inspired by the ancient philosopher Lucretius’s De Rerum Natura, which asserts that the foundations of civilization were laid when man finally lost his fear of fire and started to use it to craft metals. Thus, our ability to “control” fire is often seen as the beginning of human’s dominion over nature, and is what sets us apart from other animals.

The view that humans should control and suppress fires in wild landscapes is perhaps exemplified by a well-known mid-20th century campaign by the Ad Council and US Forest Service: Smokey the Bear. A lot of us have fond memories of Smokey, who turns 65 this year, and who is now considered one of our national symbols. We can all thank Smokey for reminding us of the importance of properly extinguishing our campfires and cigarettes and avoiding any activities that could start an unplanned fire – a message that is especially relevant in drought-stricken central Texas right now. 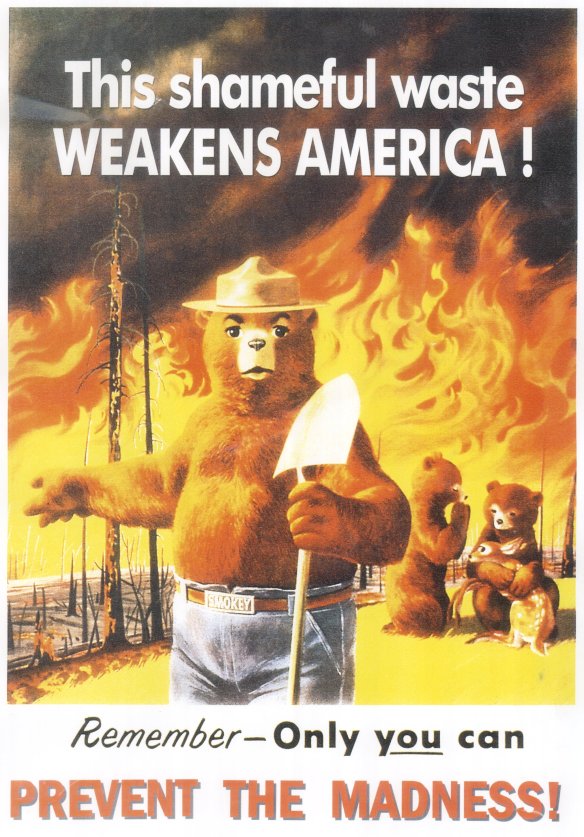 The stop-fires-at-all-costs ideology behind Smokey’s campaign, however, has been criticized by many as ignoring the important role of fire in landscapes that have evolved with natural fires as a renewing and necessary element of landcape ecology. Some landscapes – such as grasslands, chaparral and many types of forests – require periodic fires to clear away dead understory material. Many of these fires are low-heat and slow, and do not get hot enough or large enough to reach the crowns of trees and kill older plants. Many species of plants even require the heat from fires to open their seed-pods, and simply cannot reproduce without being exposed to fires. Fire suppression in these ecosystems can lead to the build-up of dead trees, shrubs and grasses that will provide an unusual amount of dried fuel when a fire eventually sweeps through an area. When combined with drought, high winds and dry air (sound familiar, central Texans?) these fires can become so large they reach the crowns of the trees (“crown fires”), and often are so hot and powerful that they burn everything in the landscape, including mature trees that are usually benefitted by lower-intensity fires.

An entire branch of ecology – fire ecology – is dedicated to understanding the effects of wildfires on ecosystems, which can be essential in maintaining and restoring native landscapes. One of my favorite artists, Charley Harper, provides an exquisite example of the integral role of natural fires in ecosystems in his painting Kirtland’s Warbler. Charley’s artwork appeared alongside an article by Jean Ducey in the April 1978 issue of Ford Times Magazine describing the necessity of fire in conservation of breeding habitat for the endangered Kirtland’s Warbler. This rare bird makes its nest at the base of Jack Pine trees, whose seeds require fire to be released (skillfully illustrated in Charley’s painting below) and a bed of ashes in which to germinate. Fire suppression in Michigan’s lower peninsula kept Jack pines from reproducing and, as Ducey describes,”Man’s efficiency…has tamed the forests and threatened the warbler with extinction.”

Kirtland's Warbler. 1978. Art used here by permission and Copyright Estate of Charley Harper. A lithograph is available at http://www.charleyharperartstudio.com.

Through the use of prescribed low-intensity burns that are set intentionally under controlled conditions, ecologists were able to restore the specialized habitat of the warblers. And guess what? It’s working! Here are the population estimates for Kirtland’s Warbler – provided by the Michigan Department of Natural Resources (MDNR). For more information on efforts to conserve this endangered species, visit the MDNR site. 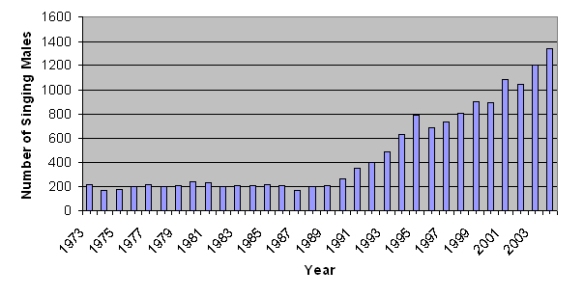 Number of singing males is used to estimate population size in Kirtland's Warblers. Michigan Department of Natural Resources. Recall 1978 was the date of the Ford Times article featuring the artwork of Charley Harper.

emerging from the ashes

“In the wake of devastation and destruction, these works of art symbolize one’s ability to renew, rebuild and persevere” -Art From The Ashes

Whether you see wildfires as agents of destruction or renewal, it cannot be argued that they are agents of change. While we might not be able to see it now, current wildfires could possibly bring about positive changes, either for the landscape or in our own lives, and can help bring us together as stronger and more connected communities. A California group called Art From the Ashes, whose mission is to provide support for communities devastated by wildfires and other natural disasters through the creation of art, is working to do just that. By using reclaimed materials left in the wake of fires, artists create works that are donated and then sold to provide relief for victims of natural disasters. A local news story from KTLA illustrates this creative process with Art From the Ashes  founder Joy Feuer. The exhibitions themselves are also opportunities for communities to try and find some solace and perspective. The group has recently expanded their scope to include all natural disasters and their upcoming exhibition Artists Unite for Japan runs September 17-30 at Royal/T in Culver City, CA to benefit the Japan Society Earthquake Relief Fund (opening reception 9/17, 6-11pm). Among many other talented artists, this exhibition will feature work from the master of wood firing, potter Peter Callas. I’m sure the presence of Art From The Ashes in central Texas in the near future would be welcomed and appreciated. In the meantime, find out what you can do to help by visiting the Central Texas Red Cross.

Xenia Zampolli 'In Flight' Reclaimed branch from Deukmejian Wilderness Park-Station Fire, feathers. Photo courtesy of and used here by permission from ART From The Ashes.

2 thoughts on “the art of fire”