Tree of Life (~3,000 species, based on rRNA sequences) by David M. Hillis, Derrick Zwickl, and Robin Gutell, University of Texas.

It’s not often that I have featured poetry here on the biocreativity blog, but there’s a first time for everything. And, there is a lot of great science poetry out there that I hope to feature someday. Thanks to my friend and colleague David Hillis for pointing me toward this one, which was published in the journal Systematic Biology yesterday. This is the first poem published in the journal, and I hope this is a trend that will continue. What are your favorites in science and nature poetry? What are some other journals that are incorporating the arts into their publications?

The Tree of Life

I think that I shall never see
A thing so awesome as the Tree
That links us all in paths of genes
Down into depths of time unseen;

Whose many branches spreading wide
House wondrous creatures of the tide,
Ocean deep and mountain tall,
Darkened cave and waterfall.

Among the branches we may find
Creatures there of every kind,
From microbe small to redwood vast,
From fungus slow to cheetah fast.

As glaciers move, strikes asteroid
A branch may vanish in the void:
At Permian’s end and Tertiary’s door,
The Tree was shaken to its core.

The leaves that fall are trapped in time
Beneath cold sheets of sand and lime;
But new leaves sprout as mountains rise,
Breathing life anew ‘neath future skies.

On one branch the leaves burst forth:
A jointed limb of firework growth.
With inordinate fondness for splitting lines,
Armored beetles formed myriad kinds.

Wandering there among the leaves,
In awe of variants Time conceived,
We ponder the shape of branching fates,
And elusive origins of their traits.

Three billion years the Tree has grown
From replicators’ first seed sown
To branches rich with progeny:
The wonder of phylogeny.

© The Author(s) 2012. Published by Oxford University Press. This is an Open Access article distributed under the terms of the Creative Commons Attribution Non-Commercial License (http://creativecommons.org/licenses/by-nc/3.0), which permits unrestricted non-commercial use, distribution, and reproduction in any medium, provided the original work is properly cited.

I hope all you readers have had a very good first week of 2012! In keeping with the New Year’s theme, resolutions to consider and hope for good things to come this year I thought Dr. Seuss’ The Lorax would be a fun topic to visit this New Year season.

I just found out that Universal Pictures is releasing a computer animated version of The Lorax in March 2012. It’s always tricky when someone makes your favorite book into a movie. On the one hand: you love this book, wouldn’t it be fantastic to see it on the big screen? On the other hand: what if filmmakers just don’t get it “right” (not to mention Hawley Pratt’s 1972 old-school animated version of The Lorax is already pretty good). With a story like The Lorax, one has to be skeptical of a hugely for-profit film industry setting out to re-tell one of the most poignant environmental tales of the 20th century, right? Well, we’ll see.

Even though Seuss’ book was published in 1971, overexploitation of our world’s natural resources is just as rampant today, if not more so. So, even though I dread what could go wrong in the re-telling of The Lorax, maybe exactly what we need in 2012 is a remake of this film for a new generation.

This book means a great deal to me, as I’m sure it does to many of you readers. In part, it inspired me to pursue a career in conservation. Or, at the very least it’s message galvanized me to do my part to help protect the environment from Once-ler’s of the world, to use my science as the tool with which I could translate the messages (typically interpreted through ecological patterns in population size, animal behavior or distributions) of creatures who cannot speak for themselves in our language. Fortunately, there is a slew of modern-day, real-life Loraxes (or maybe Loraxi?) out there, many of whom aim to bring awareness to deforestation and other natural resource exploitation through their art.

Deforestation Art: Speaking for the Trees

It’s a challenge to find much Lorax-inspired art that’s not an original work of Seuss himself, but I did come across this lovely print by Mt. Pleasant Press over on the BB-Blog: 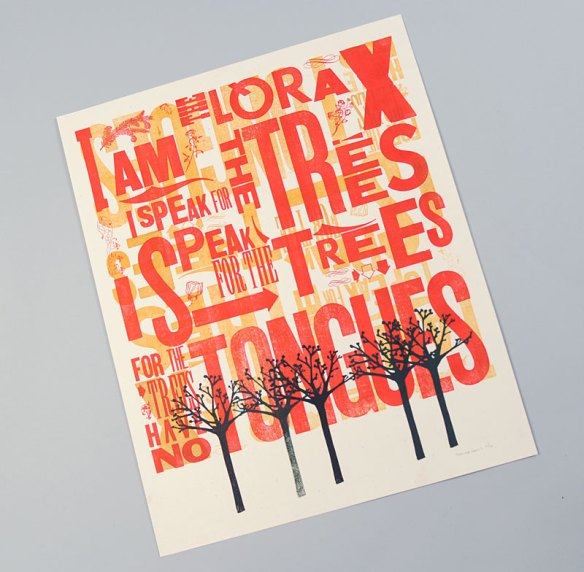 This clever advertisement for the World Wildlife Fund over on The Conservation Report blog quite literally makes the connection between our Earth’s life support systems and deforestation.

In a protest against deforestation in Iran, activists and artists created this very Once-lerian scene (covered here by Green Prophet):

The Iranian protest piece above is a great transition into the work of by UK artist Angela Palmer, who has quite literally tackled the theme of deforestation in her Ghost Forest Project. Her series of massive rainforest tree stumps from Ghana in West Africa have now been publicly installed in Trafalgar Square and Copenhagen and currently resides in Oxford. The installation is meant to bring awareness to the rapid rate of natural resource exploitation both in the tropics and worldwide. The website created around this project is impressive and provides information on the art, the artist, responsible forestry in Ghana and detailed descriptions of the seven tree species featured in the Ghost Forest Project.

Though the idea of “let’s display some tropical tree stumps” sounds simple, this incredible documentary short from The Ghost Forest Project describes the entire process that Angela Palmer went through to get these massive organisms to Trafalgar Square for their first exhibition. It’s incredibly inspiring and it sure packs a punch:

“The tree stumps were exhibited as a “ghost forest” in Trafalgar Square in London in November 2009, and then in Copenhagen in December during the UN’s Climate Change Conference. The Ghost Forest is now on the lawn of Oxford University’s Museum of Natural History and the Pitt Rivers Museum and will be there until July 2012. The trees are intended as ‘ambassadors’ for rainforest trees throughout the world.” – The Ghost Forest Project

Linda Kunik is a painter, photographer and installation artist whose work deals with environmental issues and globalization. Through her 2006 Deforestation and the Land series, Linda hopes to bring attention to both the beauty and the fragility of Earth’s landscapes. You can see more of her work at www.lindakunik.com. 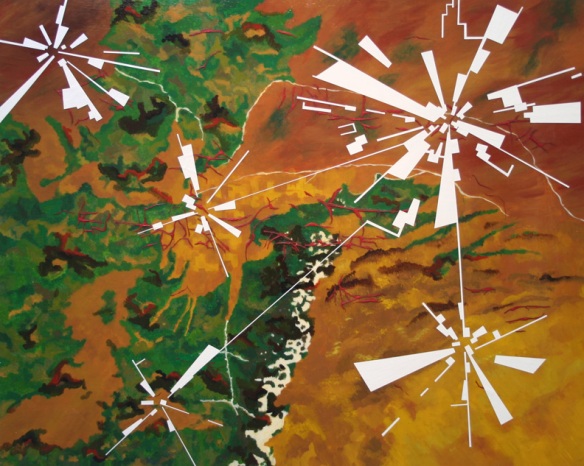 “Cicatriz is a painting I did about deforestation in the Altiplano of Bolivia. Cicatriz means scar in English. In this part of the Altilplano,they are deforesting in order to build these developments which grow radially, then a road is built and another development is planned and constructed.  I found photographs of these developments on the internet and created this abstract/representational image.” -Linda Kunick

These rolled linen art pieces by New York artist Ian Trask quite clearly evoke images of deforestation and are created from discarded fabric scraps. You can see more of these amazing rolled fabric sculptures on Ian’s website www.forkartist.mosaicglobe.com.

“As a sculptor, [Ian] explores the inherent aesthetics of material waste.  He argues that one of modern civilization’s greatest tragedies is the abundance of waste that results from an out-of-control, consumptive materialism in an industrially advanced global marketplace.   By choosing trash as his medium [Ian] reduces the material demand he places on his own immediate environment while also suggesting to his viewers the importance of redefining how we look at our waste.”

Much of printmaker and painter Marian Osher’s art explores human relationships with each other and with nature. Marian also curates a great list of links to eco-art related organizations on her website and discusses eco-art on her blog marianosher.wordpress.com.

“My art also allows me to share my continuing exploration of universal connections between human spirituality, the non-human animal world and harmony with the environment. Since 2000 I have chosen to create monotypes, monoprints, and paintings using water-soluble environmentally friendly media.” – Marian Osher

Renewal + Hope for the Future

While it is certainly important for us to be aware of the problems of deforestation, I think it’s also very important to understand what we can do about it. One of my favorite messages from The Lorax is about hope for the future and the possibility for renewal. This is a very New Year’s kind of message, but it’s not just for fiction! In real life, rehabilitation and reforestation of ecosystems is a very large and important branch of the field of ecology and some amazing things have been done in this field! Some of my very early scientific research was focused on assessing reforestation efforts in Hawaiian rainforests that were cleared in the past for cattle ranching. Some of my dissertation research involved a lot of aquatic restoration activities to improve habitat for the endangered Barton Springs Salamander. For more examples, I encourage you to visit the Society for Ecological Restoration‘s Restoration Project Showcase, which displays some really amazing before and after photos of restoration sites. Here are a few artists whose restoration-themed work gives me hope for the New Years to come:

One of the earliest representations of reforestation in art I could find was Canadian artist Emily Carr’s 1936 oil painting entitled Reforestation which is currently housed at the Vancouver Art Gallery.

Marian’s work not only brings awareness to deforestation and loss of habitat issues, but her 2007 print Regeneration speaks to the very Loraxian hope of recovering from deforestation with time and patience. 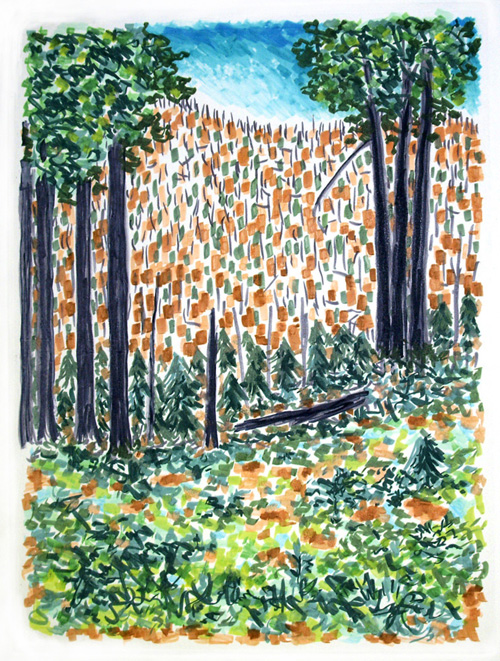 Regeneration, monotype print © 2007 by Marian Osher. Used with permission from the artist. http://www.marianosher.com

In his 2002 series Enchanted Trees Reforestation, Seattle artist James Sutherland portrays portraits of trees in these colorful painted carved plaster panels. You can see more of these on his website www.jameswsutherland.com. James told me a great story about how these works got their name:

“The title of my “Reforestation” exhibit came about in late 2002 after my first exhibit of 25 “Enchanted Trees” sold out on opening night. Since folks (patrons) were interested in having their newly purchased artwork, I got to work on 25 or so “replacement” pieces, in order to fulfill my agreement to keep a full exhibit hanging at the cafe. Since I needed to replace the Forest, I decided to call the exhibit of new work “Reforestation” ” – James Sutherland

I came across Rick Crane’s Reforestation print on his shop on society6.com. I absolutely love the graphic simplicity and repetition of the trees across the landscape, which reminds me a lot of Charley Harper’s Octoberama. To me, it portrays the great amount of healing healing that can be accomplished, even by a single person person, to help restore ecosystems one step at at time. 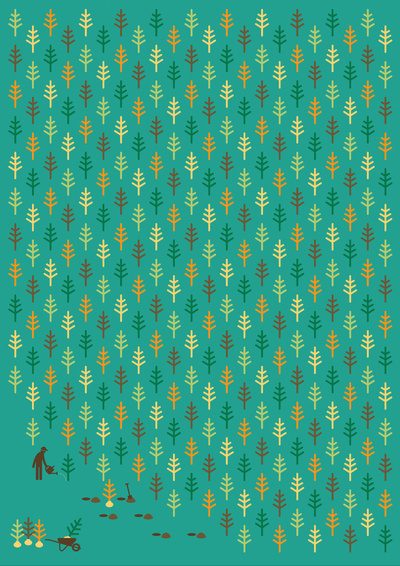 The Lorax + 40 Years of Education

2011 marked the 40-year anniversary of the publication of The Lorax, and several Lorax-related modernizations have hit the web in recent years. Seussville.com’s The Lorax Project, for example, is a collaboration between Conservation International, Dr. Seuss Enterprises and Random House Publishing to help raise awareness of forest ecology and conservation worldwide. You can also download The Lorax eBook and the Lorax Garden game for your i-devices. Though, given my call back in July for more educational and ecologically relevant i-things, the game certainly lacks the ecological message I was hoping for. Even the academics have joined in the fun of the 40th anniversary of the publication of The Lorax. In an August 2011 article in Nature, Emma Marris discusses the policy implications of the book 40 years after its publication.

“Unless someone like you cares a whole awful lot, nothing iss going to get better. It’s not.” – The Lorax

This blog is a lot of fun, but it takes a lot of hours to research and write each week. If you enjoy what you read here, please consider making a donation.

Biocreativity is a member of the Science Artists FriendFeed curated by Glendon Mellow!