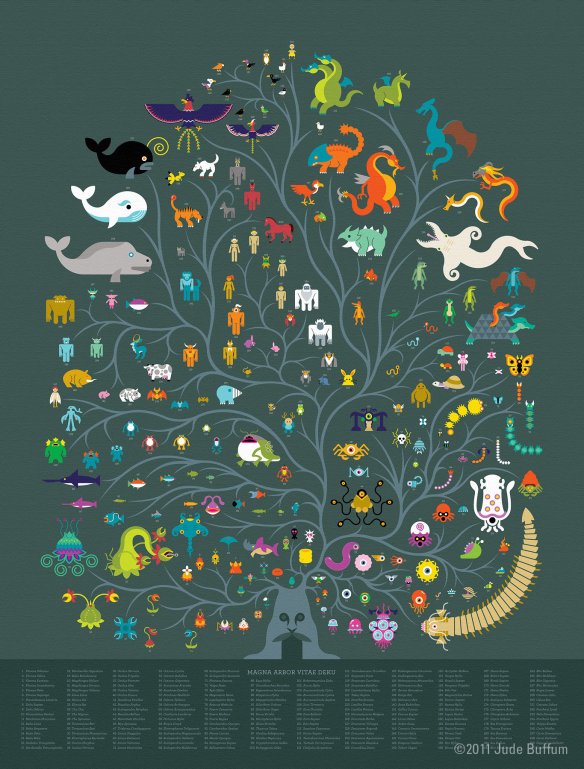 I came across this print today which features a very biocreative rendition of the evolutionary biology of the creatures of the Legend of Zelda video game. Created for a show last fall at iam8bit gallery in Los Angeles, this poster by artist Jude Buffum shows 200 of the game’s legendary species complete with binomial Latin names and their common ancestors. Click here to see details of this print. Here is Jude’s statement from the show:

I created Magna Arbor Vitae Deku (traslated “The Great Deku Tree of Life”) a sprawling exploration of the evolutionary biology of the 200 most important species from the Legend of Zelda video game series. Complete with binomial Latin names (Zora Bellator and Zora Fluvialis share a common ancestor with the more peaceful species Zora Sapien, for example), the brances of the Deku tree trace the evolution of each species over millions of years. Forks in the branches indicate an extinct common ancestor of the species that follow.

As I’ve discussed before on the biocreativity blog (the ecology of Frogger), I think popular video games have the potential to have a role in science communication. Buffum’s print is a really creative way to think about evolutionary relationships, even if it is with fictional species. However, can anyone spot the reason Buffum should have collaborated more closely with a biologist on this print?

Buffum actually uses quite a bit of interesting biological imagery in his infographics and illustrations. I think we may have found the ultimate designer capable of creating engaging science video games! Indeed, he’s already collaborated with The Franklin Institute on their new exhibit about electricity, and this infographic created for O.C. Tanner could be the basis for a fun new game on gene expression! 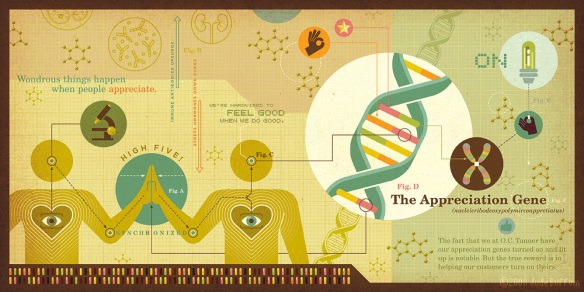